Hey guys, I'm DeMarco Scarnegie! I was one of the artists for A Game About Literally Doing Your Taxes, the first game that Brandon Hesslau, Josh Eckhart, Vince Weiss, and I worked on as a team. The game has an interesting backstory, and we had a lot of concept art and documents lying around on our computers that I thought would be interesting to share with you all! :)

So, the day before our game jam, I had this dream where Josh had the idea for our game jam game. In my dream, Josh was super proud of the title he came up with "A Game About Literally Doing Your Taxes," and by the end of the dream, we had successfully made a competitive multiplayer game about filing paperwork. The first player to finish their paperwork got the most tax returns, and the game repeated until all but one of the players went bankrupt.

When I pitched my dream to the gang, they loved the mechanics, but Brandon and Josh really wanted a darker, single-player approach.

Here were some of the ideas we tossed around...

We decided to scrap all these ideas and focus on a dwell into insanity! Fun stuff, man.

We worked on this game over a weekend at me and Josh's apartment, setting up our work stations on the kitchen table while Vince worked remotely. Fortunately, Brandon lived down the street, so lugging over his computer equipment wasn't too bad. We got very little sleep but did take an occasional break to watch YouTube videos, watch episodes of Love, Death, and Robots, or talk about how we wanted to sleep. We originally wanted to make this game for an itch.io game jam, but unbeknownst to the group, I had personally screwed up the dates and didn't realize it until we had completed the game that the jam I was talking about had already ended.

This was the original prototype Brandon showed us. I swear the compression on the video wasn't this bad lol 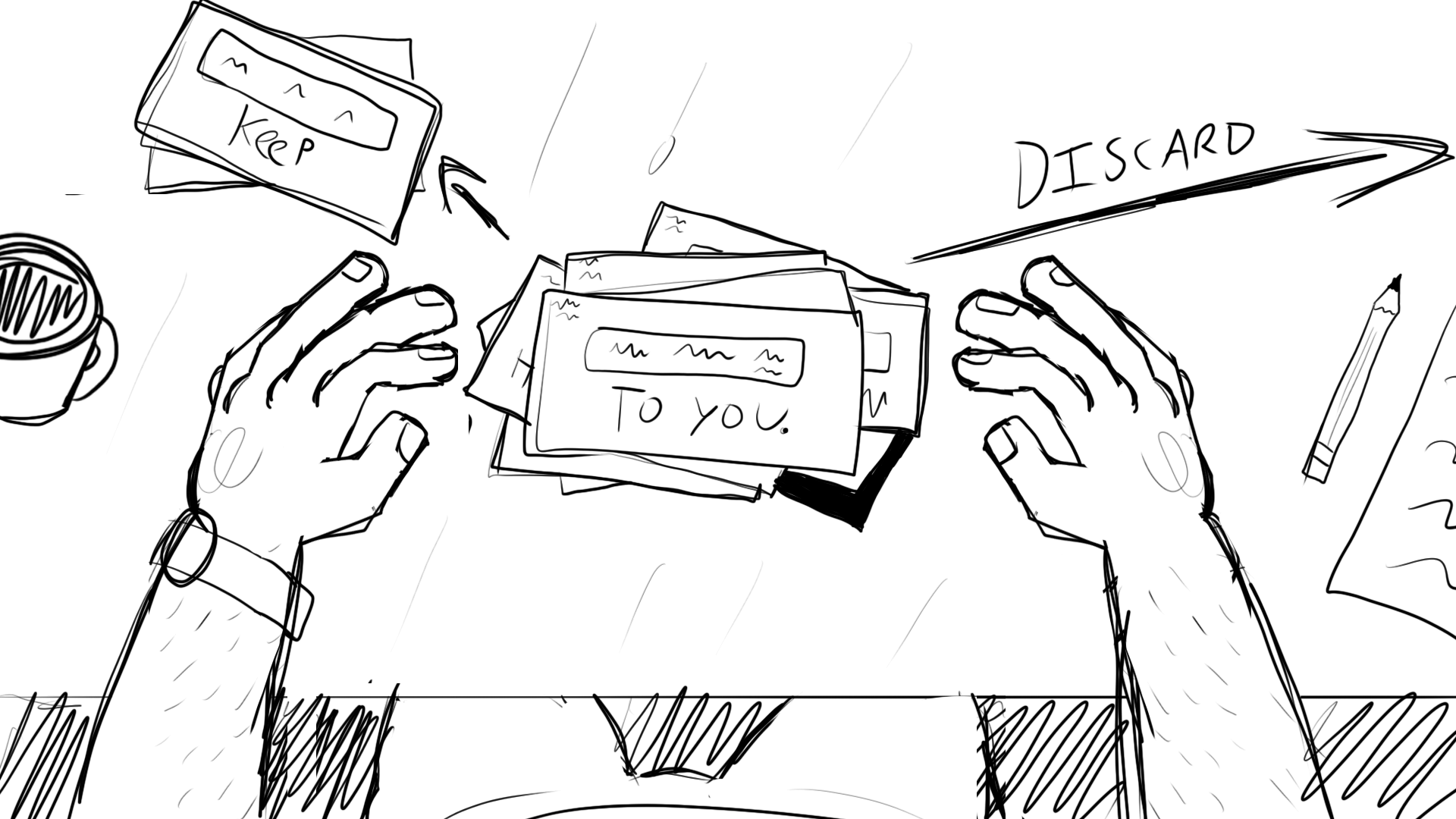 This was the original concept image I sketched for the game, and below was the spooky version! 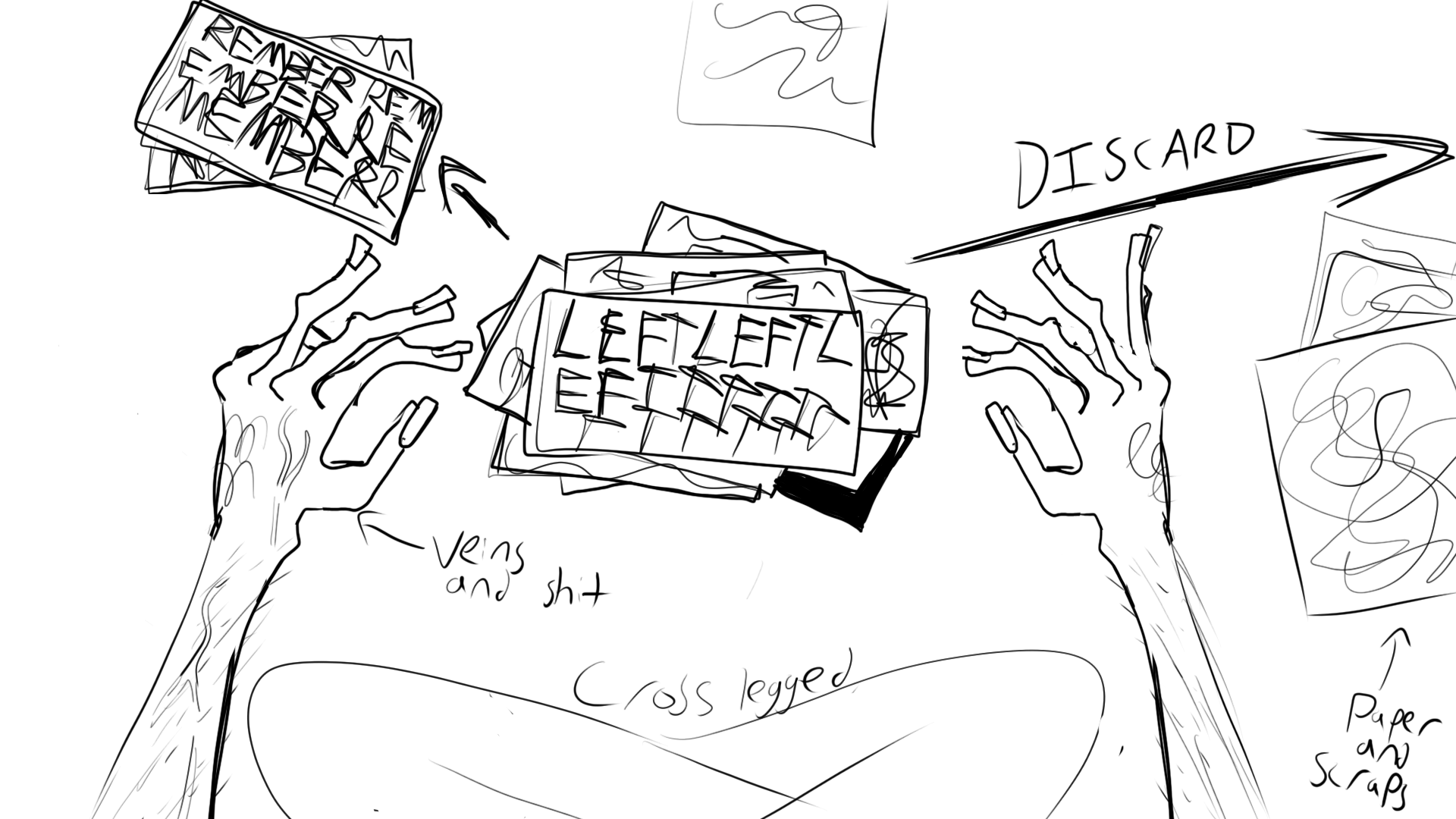 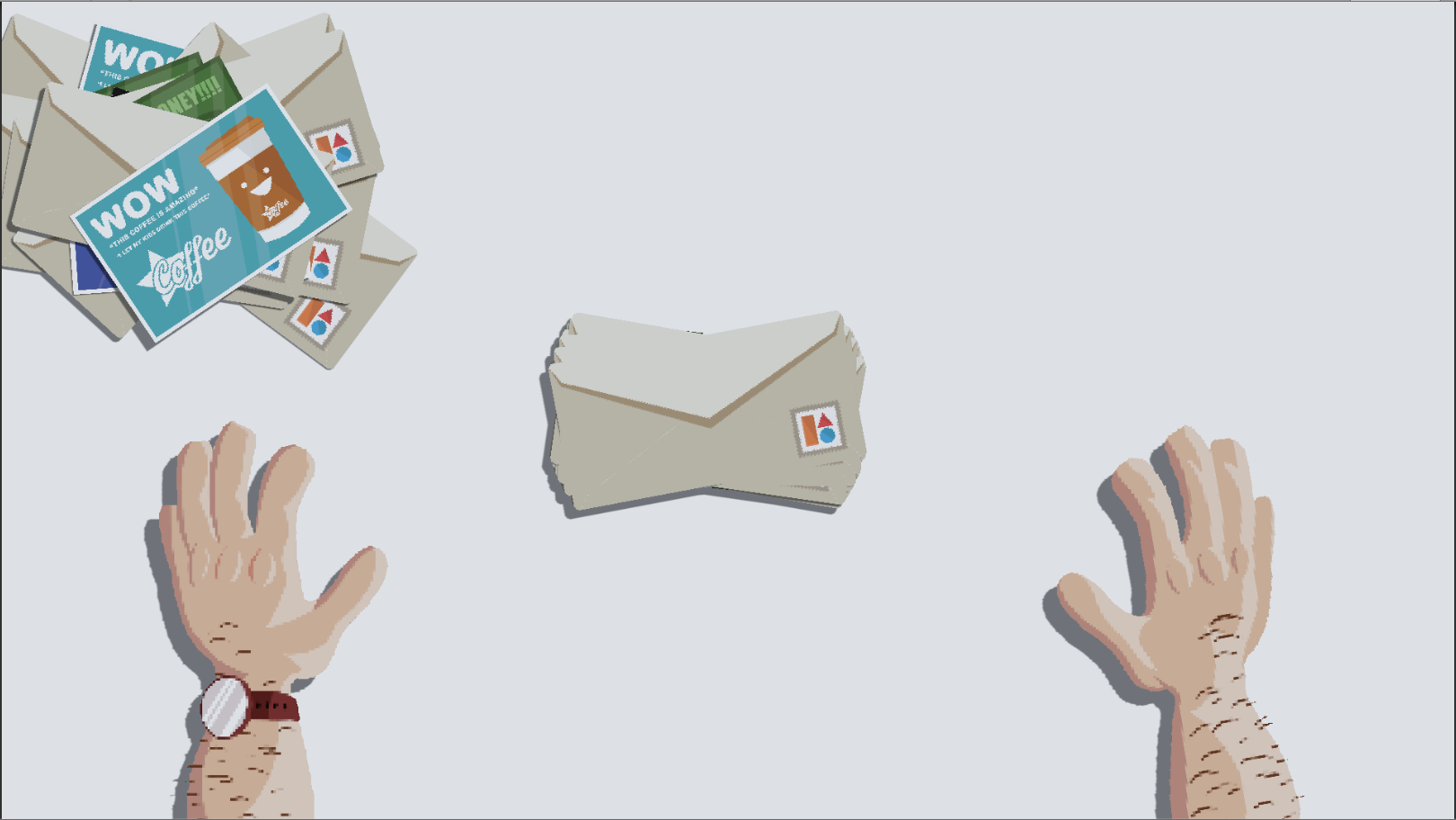 This is our first test putting art assets into the scene. It was around this time I started working on the desk while Vince focused on making most of the ads/taxes. 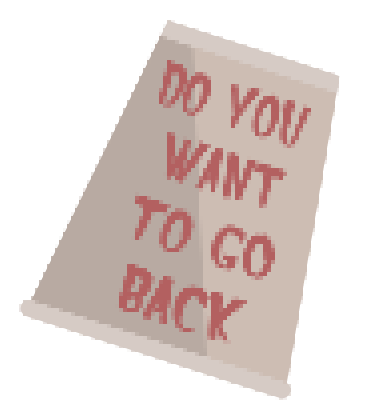 The cup had text originally which is neat.

The envelope, too! We decided to have the envelope already be opened instead, so we didn't have to animate anything more than we had to.

The hands used to actually be a lot brighter, but as you can imagine, that looked pretty awkward in the dark lighting. Also holy smokes, I really forgot to clean up those floating pixels, didn't I? 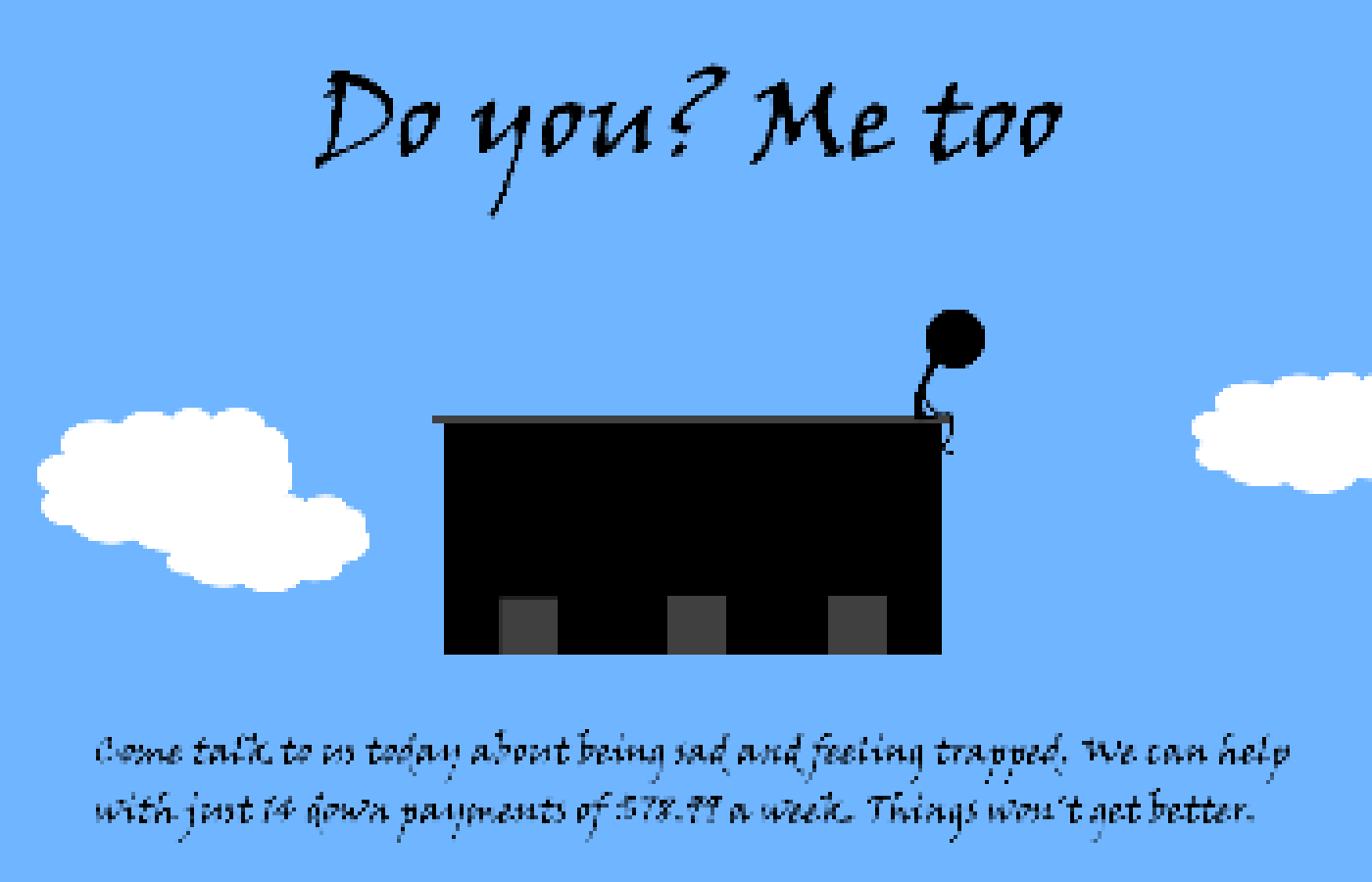 Josh made a fine work of art, but it didn't really make sense, so we left it out. And shamed him.

Another piece of unused scribbles. 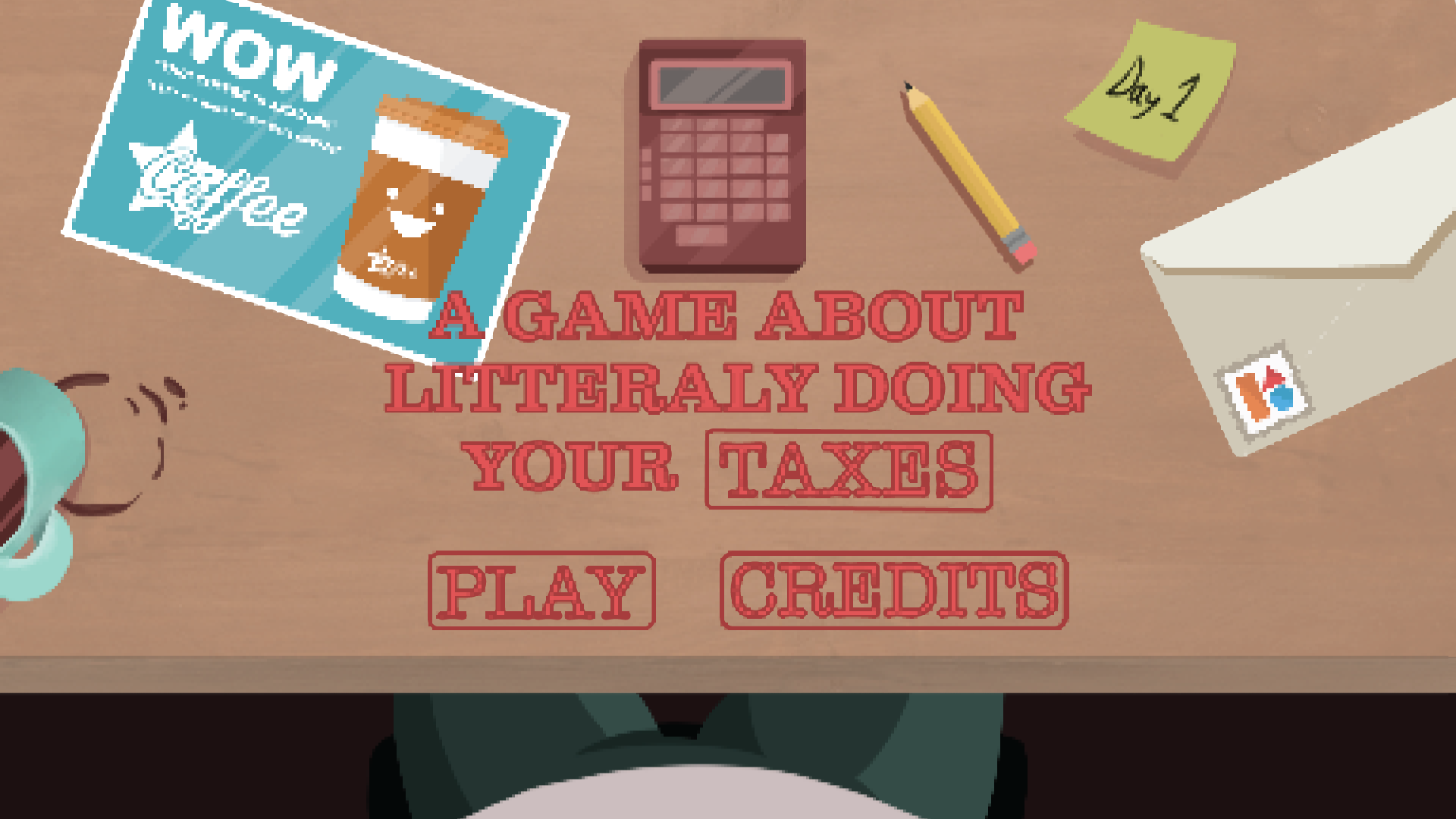 I actually wanted to write this devlog all because I thought it was really cool that we originally had a pencil the scene. I genuinely don't know how what happened to it, but it's gone now. Rest in peace, pencil buddy. :(

Overall, we had a blast making this game, and never expected the overwhelming support we received from it. We're super thankful to have such awesome fans, and we're stoked to release the full game of our next big upcoming project: Buddy Simulator 1984.

Get A Game About Literally Doing Your Taxes

A Game About Literally Doing Your Taxes

Just another totally accurate simulation of doing your taxes. We swear.

I want to know about the chiptune version of Dave Brubeck’s Take Five! Who arranged this?

Reply
Not a Sailor Studios1 year ago

Apologies for not noticing this reply until now, but this was arranged by Brandon Hesslau--the coder/composer for our team!