A downloadable game for Windows and macOS

Never has there been a game so objectively accurate to the role of an everyday tax payer. The goal of the game is to sort the tax from the trash in order to successfully make it through the week. This experience lasts a total of 7 days, so about 10 minutes.

This project was part of a game jam and created in 48 hours!

"A totally normal game about doing your taxes and absolutely nothing else."

Join us on Discord: https://discord.gg/y9zSMv4

Perhaps the most accurate game when it come to doing taxes.

crazy ahh game I love it

This was a very enjoyable experience, thank you for making the game!

I think i might never be able to do taxes

how did  you make an already scary thing even more scary?

So funny but so scary idk how they did it

THESE AREN'T DOCUMENTS FROM THE AMERICAN GOVERNMENT

A fantastic game with jazzy chiptune and a great art style! I loved the little whispers you would hear throughout the game.

I JUST WANTED TO PAY MY TAXES

Really enjoyed this game! I got so much back on my taxes!

yep taxes are the best

Do your taxes or the taxes demon will claim your soul.

Was not expecting the twist, short and nice, would and have recommended to a friend.

Well.. that was more then... wait.. thats right.
NOTHING TO SEE HERE. (Well Done)

Enough Said - A Game About Literally Doing Your Taxes

Well, it lives up to its title, nothing special here.

i did pretty good on my taxes :)

pretty good, i know how to do my taxes now, so pretty good.

wish there was a claim button as well besides download only.

You ever just wake up one day and remember that you're a fully grown adult who has to pay their taxes? Maybe you're not an adult, but you want to experience the joys of paying taxes? Well, look no further, for this game is an accurate depiction of it!

(***SPOILERS***)
I really wasn't expecting this game to go in the direction it did; the atmosphere was almost too cheery for a game about, well, literally doing your taxes. It wasn't until you start hearing the voices and having reality shift on you that you realize that something is wrong (even though taxes will induce voice hearing and vision loss normally). Once you get to the point of no return and find out that you're in what appears to be an asylum after seeing so many eyes, words, and visions, the story can be interpreted in many different ways: were you there because you needed to be? were you there because you discovered something (hence the constant eyes everywhere)? Regardless of your end decision, the game ends in a way that just leaves you with more questions than answers (as taxes usually do).
(***END SPOILERS***)

All in all, this is a game about literally doing your taxes. Not much more to say except that you should spend 10 minutes playing this amazing tutorial :)

Reply
Jaxson and the bros57 days ago

Okay this game is actually really good and I love the little storyline that the creators put into the game its scary because it doesen't do to much but makes you feel on edge.

so uh is it just me who got a Lil jumpscare after doing taxes?

Weird, amusing, and despite literally doing your taxes, it was a really fun little experience! And the funky lil background tune managed to keep it cool.

The atmosphere was weird-  Almost unsettlingly normal! But the gradual additions of details which crept onto the table were brilliant! Of course, the graphical style is one of my favs too. All around just an excellent, enjoyable time!
Reply
Khanivore_169693 days ago(+1)

This was such as fun experience! Thank you! :DD

This was alright. Kind of one note, there's one twist and then not much beyond spooky visuals that don't connect to a them and don't explain anything.

This is a very informative game about literally just doing your taxes. Nothing else. 🙂

Shockingly accurate! They should use this game to teach how to file taxes!

Reply
Casper The Helipilot204 days ago(+2) 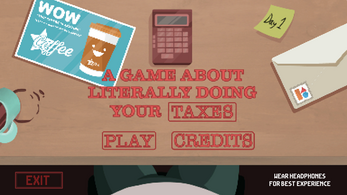 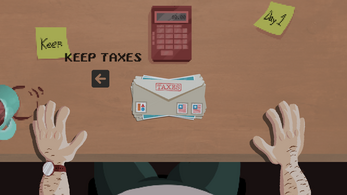 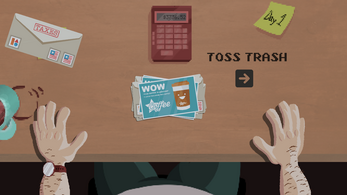 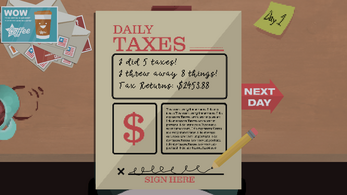 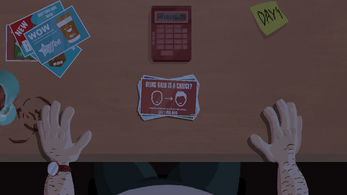